Vividly colored homes, along the tree lined streets, welcome you to BrassLeaf.  On a beautiful spring day take a leisurely walk to Starbucks and grab a treat with a friend.  A new home, a new neighborhood, a new lifestyle… appreciate being able to lock and leave without giving up the privacy of a single family home. Give up the maintenance and gain so much more at BrassLeaf!

Beautiful, Love, Strong, Quiet, Warm, More Comfortable….words our customers use to describe their homes. You know that with a Cobblestone Home you are getting more, because we give more. Being awarded the top 1% of custom home builders in America, we are constantly raising the bar for ourselves and the building industry. Enjoy working with our professional team of experts with decades of experience in construction, design and customer care. Buying or building a Cobblestone Home gives you peace of mind, after all we are known for customer care long after the build.

Whether you are catching a game at The Loons baseball stadium, T-time for golf or a tennis match at the Greater Midland Tennis Center, ranked one of the top 25 tennis facilities in the US….Midland is a unique town. Home to MidMichigan Health, University of Michigan Health System and The Dow Chemical Company world headquarters, along with many thriving small and mid-size businesses, as well as just over 40,000 residents. Midland is consistently ranked in the top five small towns to raise a family and in 2018 it was ranked in the top four safest small cities for retirement. With one of the best Center for the Arts showcasing world class talent, a nationally recognized rail trail and now the countries longest outdoor canopy walk at Whiting Forest of Dow Gardens, this is a town that offers an exciting and active lifestyle for everyone. 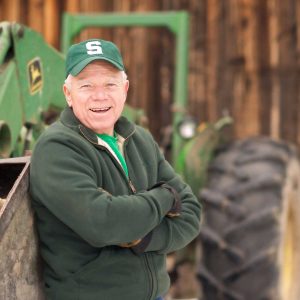 John and Sandy Bartos are synonymous with Midland. The Bartos’ involvement in the community over the last three decades has been extensive. They have volunteered in more than 25 state and local organizations and boards.

John currently serves as a trustee for the Charles J. Strosacker Foundation and as a member of the Brownfield Redevelopment Authority. He is on the boards of the Mid-Michigan Innovation Center, MITech+, the Blue Water Angels, and the MidMichigan Medical Center.

The Bartos’ wanted to make a difference in their hometown of Midland. In 1976 they founded The Three Rivers Corporation of Midland. They might have been the only ones who imagined 40 years later that the construction firm they founded would grow to 400 people.

John & Sandy were involved in building several of Midland’s treasured landmarks, starting with the Midland City Hall and in 2007 their company, Three Rivers, was chosen to build the Loons’ state-of-the-art stadium, Dow Diamond.

John grew up on the farm, owned by his family for the past 120 years, that adjoins CopperLeaf.  We are fortunate to still be able to call John and Sandy neighbors.